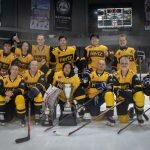 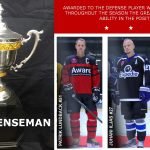 The winner this year went to Patrick Lundback for his strength on defense all season, accruing 18 points (6 goals and 12 assists) in 16 games with five minutes in penalties. 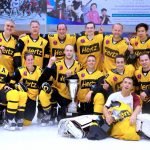 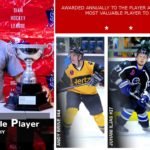 The 2017-2018 Johnny Oduya Most Valuable Player candidates were all defenseman.

Our second candidate was Juhani Ijas of Expedia. This was Ijas first season in the SHL, and he really shined.

Our third candidate was the Aware captain, Patrik Lundback. Lundback led his team to 14-4 record in the regular season.

This was a hard decision, but the 2017-2018 Johnny Oduya MVP went to Patrik Lundback of Aware. 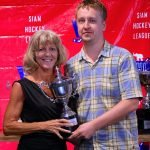 The PeterGoverde Memorial Sportsmanship Trophy is awarded to the player that best exemplifies  the ideals of sportsmanship, integrity and fair play, combined with a high standard of playing ability.

We had a really deserving nominees for the inaugural season  and playoffs of 2016-2017.

Our first nominee was #2 from Aware, Brandon Vick.  Brandon had a great inaugural season and post season putting together 15 goals and 26 points.

Our second nominee for the PeterGoverde Memorial Sportsmanship Trophy was #95 Jari Eerikainen from Sport Corner-Titanium.  Jari played 11 games during the 2016-2017 regular season with 3 goals and a total of 10 points.

The winner of the inaugural PeterGoverde Memorial Sportmanship Trophy was Jari Eerikainen for his outstanding play throughout the regular season and playoffs as well as not receiving a single penalty minute. The Best Defenseman Trophy is sponsored by Sport.

We had some incredible defenseman during the 2016-2017 season of the SHL, so it was really hard choosing three (3) defenseman and then choosing the best defenseman from those three (3).

The first nominee for the Best Defenseman was Adrian Meyers from the Sukhumvit Spitfires.

The second nominee for the Best Defenseman was Jari Eerikainen of Sport Corner-Titanium.

The third nominee and winner was Patrik Lundback from the Aware!  Not only did Patrik win the Best Defenseman, he also helped coach the Thai National Hockey Team to a 2017 Asian Winter Games gold medal! 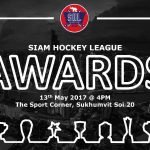 Our Third Category Awards are awards of a more light-hearted and fun character, to provide a humoristic and entertaining season-ending awards party as well as our team MVP Awards

For the Team MVP Awards, this year, they were sponsored by KoneCranes, and we had individual trophies made for each team MVP.  Our official podcaster got to do an interview through Skype with the maker of the trophies.

Below are each of the four Team MVPs. 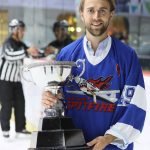 Our Most Valuable Player trophy is sponsored by Johnny Oduya of the NHL.

We had a really tough decision with this one.  Our three (3) nominees were very strong, and supported their team incredibly.

Our second nominee was Mike Wilson of Sport Corner-Titanium.  Mike had an great 2016-2017 season with supporting his team in many ways.  When Zak Garofolo had to step down as the captain for Sport Corner-Titanium, Mike stepped up to take his place and really helped push his team to a second place finish during the regular season and in winning the SHL Championship Cup!

This was a hard decision for the League Committee, but because of his 14 goals and 22 points as well as helping to lead his team to first place in the regular season, the League Committee decided to award the inaugural Johnny Oduya MVP Trophy to Donny Kerfoot. 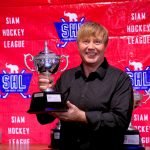 The Siam Hockey League Playoff MVP trophy is awarded to the most valuable player for his team during the playoffs.

We had a really exciting 2016-2017 playoffs.  In our first round, we had the 4th place Hooters Nana going head to head with the 1st place Sukhumvit Spitfires, and we had the 2nd place Sport Corner-Titanium facing off against the 3rd place Aware.

Hooters defeated the Spitfires in best of 3 series, winning their 1st game 2-1 and their 2nd game 5-3, giving themselves a break between the semi-final round and the final round.

SC-Titanium had their hands full with Aware, losing a rough one to Aware 6-3, but coming back in the second game to win a close 2-1 match up, forcing a 3rd game, in which they dominated Aware with a 4-1 victory to advance to the final round.

SC-Titanium annihilated Hooters in the first game 10-1!  In the second game, Hooters really fought hard to make up for their first game.  The were leading at the end of the first period by a score of 2-1, and also at the end of the second period by a score of 3-2.  SC-Titanium came back in the third period scoring 2 goals and preventing Hooters from scoring again to win the first SHL Championship by a final score of 4-3!

Our first nominee for the Playoff MVP Trophy was #71 Zak Garofolo.  Zak was only able to play in the playoff rounds, but he did put together 2 goals and 9 points in those 2 games.

Our second nominee was #67 from Hooters Nana, Michael (M. White) White.  M. White played in 3 of Hooters 4 games, amassing 4 goals with 6 points in the playoffs.

Our third nominee was Sport Corner-Titanium’s #92, Jouni Heinonen.  Jouni was the only player of the 3 nominees to play in all of his teams playoff games, putting together 7 goals and 9 points with 0 penalties.

The Siam Hockey League’s Playoff MVP Trophy was awarded to Jouni Heinonen for his superior play during the 2016-2017 playoffs!